on March 03, 2020
One thing I know is that I hate cooking these days.  It's only because I just finished college and I am burnt out on big meals and washing all the dishes because the other people in my house are super lazy.  So when I cook that means I clean too usually.  Super unfair.

So tonight, after a busy day, we hit Red Robin.  The question was, was I able to find a Keto friendly meal there?

Yes!  Red Robin had something I could eat on Keto.

I ordered a lettuce wrapped veggie burger with cheese and bacon.  It had a bit of mayo and no ketchup but it did have a tomato.  The patty is a custom blended ancient grain and quinoa veggie patty that amounts to about 130 calories on it's own.  I could have opted for turkey but I have not eaten beef for about 8 years so I guess I am staying with the trend.  It will be hard to do Keto without beef but I will keep trying.

The total on the Red Robin Lettuce Wrap Veggie Burger is 257 Calories, 33 Protein, 20 Carbs, 10 Fat, 10 Fiber, and 5 Sugars.  That was without the Bacon and Cheddar I added.  I do not believe my burger had guacamole on it.

Well you probably should not eat it this way.  Get the lettuce substituted out for the bun, then it's probably more Keto friendly.

I could have also omitted the bacon and cheese but it upped the fat just 10 points which is good actually as it brought the fat for the meal to 25 which is 62% of my daily requirement.  If I had not blown it with my omelet this morning, I would have been under on my fat.

I also ordered a side of salad, Cesar but it really was salad with Parmesan cheese on it.  I removed the croutons.  There did not seem to be any dressing.  If there was I did not see it. 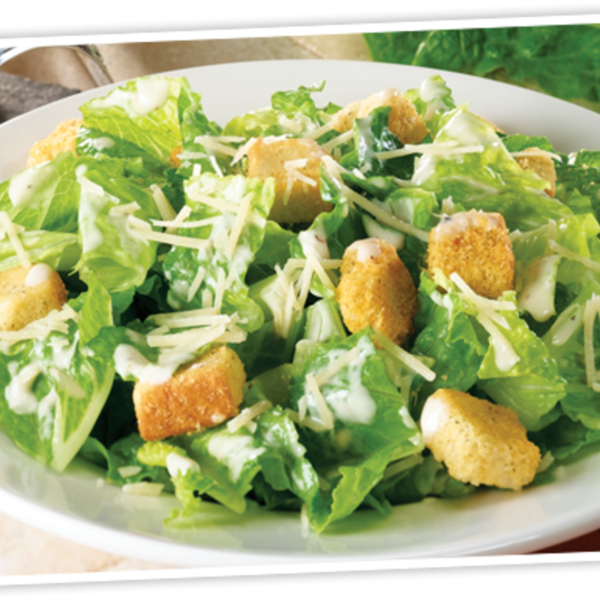 Also I treated myself to a cold diet soda but it tasted so sugary.  I double checked and she said it was diet.  I guess I didn't realize how sugary even the syrup tastes. 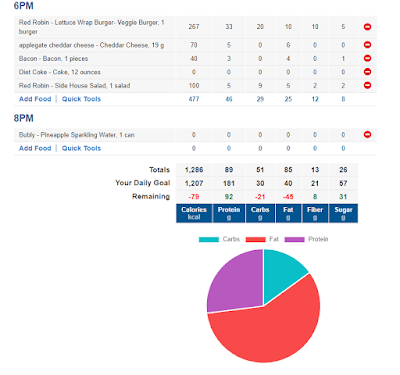 Not perfect but at least I was mostly on track.  Keto seems to consist of matching your food intake with the numbers you are given.  So far I stink at it but even so I have lost 9 lbs in 5 days, maybe more.  So I must be doing something right.  Or close to it.

Well I am only eating twice a day with a small snack so that was the only way I could stick to a 1207 Calorie Keto diet.  I did go over my carbs by 20 so next time I will omit the side salad which added 9 carbs which would put me at 20 carbs.

Time to work harder to get to know what things are what on Keto.  It's kind of like accounting, you are on a budget.  Don't go over budget, live within your means.

I will start doing much more analysis on meals I plan to eat so I can learn and stay within budget.  So far, I really suck at this whole budgeting thing. 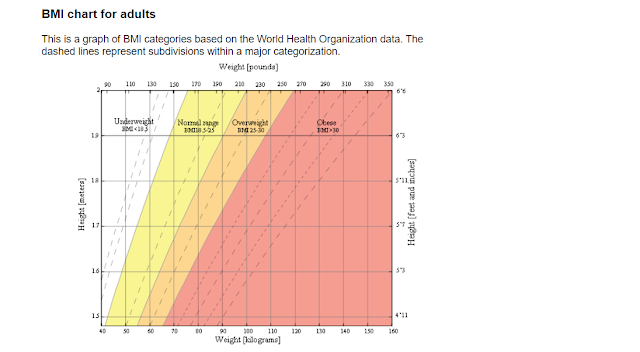 BMI and BMR What?

Hi friends, I wanted to explain I am not a medical doctor, or even a nurse.  I used to be in nursing years ago, but due to my back and feet I left that job.  I have however been in school for Information Systems Technology IS and graduated in December. This chart shows a persons Body Mass Index.  This yellow area is where I hope to eventually get to.  But right now I am in one of the worst categories I could be in with a BMI of 50.  At 310 I am in the third stage of Obesity. I did not realize that I was that bad until yesterday.  That puts me at terrible risk.  I am surprised I have not had a heart attack by now. My BMI (body mass index) indicates that I am at extreme risk to have so many health problems. My weight rose  39 lbs after I got pneumonia in the spring of 2019.  At first I lost a bunch of weight because I almost was dying. Then later with all the medications I gained weight because a lot of them were steroids.  So I bloated up and my face looked horrible.  That 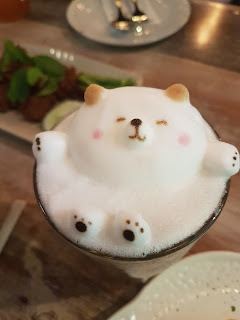 When I started Keto I was worried about being hungry. Surprisingly I am not hungry at all.  I have had little to zero cravings most of the time.  In fact I don't crave anything.  I way under ate today. That is not good.  I am not hungry either.  I am forcing myself to eat some peanuts with chocolate chips to try to make up for the lack of calories.  For a girl my size, I don't understand where my hunger ran off to? Why does Keto make me feel full all day, even when I have not eaten breakfast. Surprise!  Ketosis takes away the "hangry" feeling.  You know that one that makes you dig through every cupboard in the house and the fridge and you can't find anything to satisfy your hunger? So you end up having to go out to get something good to satisfy your urge? There is no "hangry" with Keto so far anyways. What????????  Yep!  I kid you not!!! Well that is a surprise side effect I was not expecting! Bulletproof.com says, " Ketones suppress 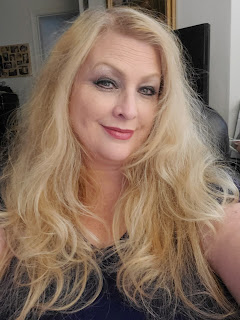 What Keto Can Do Visually In One Month

Now.... 4/20/2020 A Month or so ago....3/12/2020 Can you see the difference?  Among other losses I lost a whole inch in my neck. I lost a total so far of 18 lbs.  Yay! Those are the real dates of when those pics were taken.  I realize I got real plump from all the steroids I took last March 2019 when I was sick with what probably was Covid-19.   I was already pretty obese before that from other medications.  In fact half of my life I was normal at 135 lbs. and the second half I have been obese  going up to my worst weight at 313, thanks to specific medications. I kid you not.  I gained 100 lbs in one year on a specific medication. And 50 lbs from another.  I was feeling horrible about it. Most of my weight is from specific medications, my doctor even told me it was a side effect, after the fact.  And eating bad (or too good really) of course.  More recently it's my asthma medications that have affected me.  Especially Singulair and Prednisone when I